The Band and Bugles of The Rifles consists of Regular soldiers from the British Army that are based in Winchester.  The musicians form one of 22 professional bands within The Corps of Army Music.  The buglers that accompany the band are front line infantry soldiers drawn from across The Rifles.

The Rifles was formed in February 2007 through the merger of four famous regiments: The Devonshire and Dorset Light Infantry, The Light Infantry, The Royal Gloucestershire, Berkshire and Wiltshire Light Infantry and The Royal Green Jackets. The Rifles is the largest infantry regiment within the British Army, offering unmatched opportunity from numerous base locations situated within 3-hours travelling time from practically anywhere in the UK.  The Rifles is renown for innovation, excellence on the battlefield and its Riflemen are expected to live up to their motto: Swift and Bold.

The Regiment’s history is manifested on parade today.  Rifle green jackets and black buttons stem back to the 17th Century when Riflemen were the first British soldiers to wear camouflage instead of red tunics.  Silver bugles allowed orders to be passed over long distances because Riflemen operated in dispersed teams with individuals selected for their marksmanship, fitness and initiative.  The Band’s accelerated pace and ‘double’ march, still used across the Regiment today, reflect a tradition of quick movement and thinking; with the unique ‘back badge’, Croix de Guerre shoulder flashes and each soldier’s rank being worn only on the right arm to prevent it being seen when firing a rifle at the enemy adding further distinction to The Band and Bugles of The Rifles.

The Band and Bugles of The Rifles appear by kind permission of General Sir Nicholas Carter KCB CBE DSO ADC (Gen), Chief of the General Staff and Colonel Commandant The Rifles. 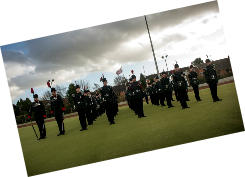 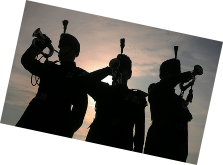 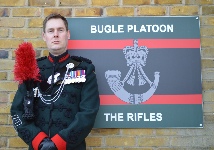